Dan Popek (* 1996) is known for his outstanding virtuosity and is referred to as the ‘Mozart of Boogie Woogie’. He masterfully combines jazz with classical, boogie woogie and pop music. Paired with charismatic entertainment, the pianist – who can play anything – brings you a brilliant piano recital like you have never experienced before…

Popek started playing the piano at the age of four. He achieved first successes at the Matthaes piano competition in Stuttgart and at Youth plays jazz with forwarding to the Jazz Lights in Oberkochen. At age 16 he performed at the legendary Boogie Woogie Festival in Hamburg (Fabrik). From then on he played with international greats such as Abi Wallenstein, Axel Zwingenberger, Joja Wendt, Silvan Zingg as well as Cory Henry and the Spider Murphy Gang, to name but a few. His first album, 88 Keys & Me, was released in 2013.

From 2014 to 2016, he won the Yamaha promotion award twice. His second album, The Shout, was released in 2016. This album also led to much international interest in his work. It was followed by first performances on German TV and concerts in Vienna (Jazz Fest), Berlin (Mercedes-Benz) and Cambrai (France). In 2018 Popek was a member of the jury in the final Casio/Bechstein piano competition Talent Days in Hamburg, and he wrote a soundtrack for a promotion video by Casio Music.

Popek played on great stages, e.g., in Old Opera, Frankfurt, in the Reduta Jazz Club in Prague and at prominent music festivals. In 2019 he was invited to the International Dixieland Festival in Dresden and performed in front of 3.000 people on the main stage (Junge Garde). Immediately he won the prestigious festival award. His current album, The Best Of Live, was released in October 2019. Further, he contributed to the Wetzlar Festival, the International Boogie Nights (Switzerland), the Kempten Jazz Festival and the Sascha Klaar Show in Roncalli’s Apollo Variety, Dusseldorf. 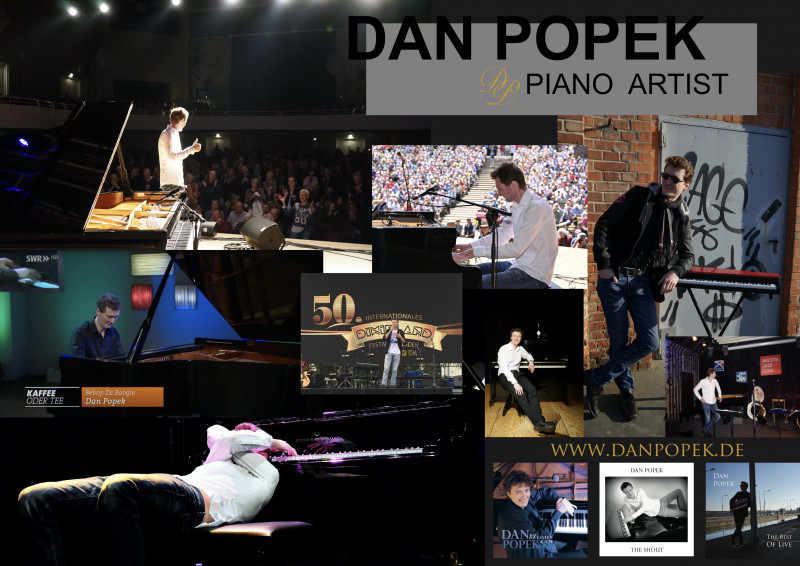